“The Element” by Sir Ken Robinson

Anybody who is in their element is going to know it. A feeling of ease, freedom and of being at home coupled with enormous satisfaction and spectacular results. This is what The Element is all about. 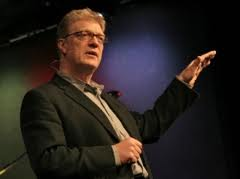 Those of you who have children in the early stages of education or anybody who just feels work is a struggle that provides little or no enjoyment should read this book. For an idea of what inspired him to write the book why not watch this TED talk from 2006 “Schools Kill Creativity”.

Robinson’s easy speaking style transfers very well to the written word especially when exploring the many real-life experiences of people, some you’ll know and others you won’t, who found their element and the effect it had on their lives.

He discusses how passions and talents combine to create your element and what this means to your life. He exposes why today’s education system with its IQ tests and funnelling of young minds into 19th century subjects is so damaging – this explained so many uncomfortable aspects of my school days which I found quite therapeutic.

Creativity is a key theme of the book which Robinson claims will be one of the most important skills in the world that is unfolding before us. He also shows how creativity, something everybody is born with, is them systematically wrung out of most us as we move through the educational system and, on a brighter note, what can be done about it.

He portrays the element in the following sections: –

Speaking personally I had my own epiphany, as Robinson calls it when you first discover your element, when I was introduced to computers in 1978. Up until that point I had struggled academically with average to poor grades and constantly struggling to keep up then I discovered programming and everything changed. From that moment on it was like I was at home: I was able to see lines of code in my head; see solutions to complex problems in terms of program constructs and for the first time people were asking for my help. I ended up with a first in computer science as a result of finding my element.

The book is great food for thought although is more of a “what” than a “how to” but for all that I enjoyed it very much. Had I read it when I was 14 (very unlikely I must say) or when my children were younger I feel it would have had a profound effect on me and my loved ones. Well worth a read in my opinion.

This site uses Akismet to reduce spam. Learn how your comment data is processed.